There’s certainly other approaches – especially if you want to distribute lots of objects on a curve. I created this solution as a small part of a larger system where I want the user to be able to place data markers on a curve – and I like how the approach highlights using vectors to create a matrix in order to transform geometry.

In this example we use a PolyFrame to add a tangent.

The PolyFrame has these settings:

Next we do a PointWrangle

We also generate a binormal. This is orthogonal to the tangent in the horizontal plane.

A normal is generated from the tangent and binormal. This will be an “upward” vector that tilts with the vertical slope of the curve.

At this location of the graph each point has these attributes:

Now we bring in our packed primitive as input[0] to an AttributeWrangle (named “transform_primitive_”) set to run over Detail. The curve is routed through input[1].

We merge the result of the AttributeWrangle and the curve so we can get a better view of what’s happening.

Now you can visualize the OUT node and change the above Location parameter and see how the packed primitive is placed on and aligned with the curve. 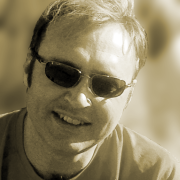 Warning: in_array() expects parameter 2 to be array, null given in /home/pinballa/public_html/learncreategame.com/wp-content/plugins/x-disqus-comments/functions/output.php on line 32